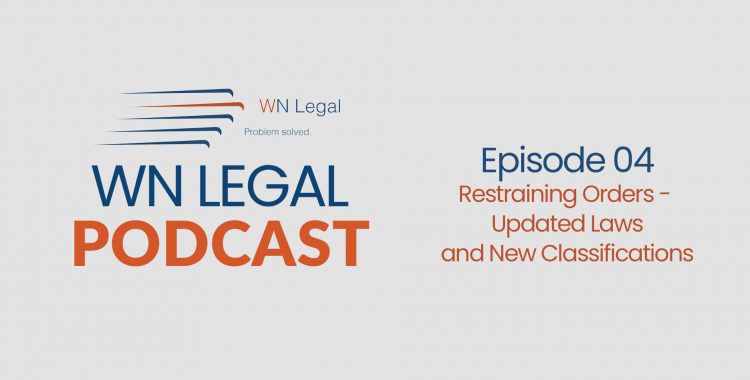 In this episode, Khew and Amy discuss different types of violence restraining orders (VROs), and how the laws surrounding them have been recently updated.

What sort of VRO might you need? What is the difference between different classifications of VRO? Do you need a trial to settle your dispute? And what do you need to do to be prepared for your legal situation?

Together, the team takes a look at the real-world issues and questions people need answered surrounding violence restraining orders.

The full transcript is below!

Now before we go on further, I do want to provide a brief disclaimer that this podcast is a general discussion about the areas of law that we practise in, that the public may be interested in. It should not be taken as a substitute for legal advice whatsoever, as each case is different. So I do recommend that you speak to us, before you decide to use any of what we’ve said as advice. In any event, that should be the case. Okay?

Aimee: Okay. So, my name’s Aimee, and Khew has introduced me, and I’m another fellow solicitor at the firm. Now firstly Khew, I suppose if you could give us a bit of a rundown as to the previous violence restraining orders in WA, and then what has changed I suppose, in respect to the new family violence restraining orders? So if you could just give a brief comparison about the two, and how I suppose clients can negotiate their way around the two, and how they work?

Section 34, however, misconduct restraining order hasn’t changed much. I believe there is a little bit but, it’s not much. It hasn’t changed as much as compared to …

Aimee: To ensure that you satisfy that section before you apply for a restraining order?

Aimee: So as to not apply for the wrong one.

Aimee: I think what’s important from this new term in respect to the family violence as it encompasses a lot of more of, I suppose, the intrinsic issues in relation to marriages and de facto relationships things that happen. As opposed to the violence restraining orders where you would have to satisfy that the other person’s conduct was offensive or intimidatory in nature. This just opens the door to a whole nother behaviour.

Khew: Yes, that’s correct. The old restraining orders act usually says … I believe from memory … says that to satisfy an act of violence the person’s behaviour that is intimidatory or offensive. That very word intimidatory and offensive is so broad. But that was the old law, and now they’ve taken that out, and they’ve replaced it with violence or threat of violence. And that is a lot more specific.

Aimee: Yeah, and I think it’s important especially with the way that a lot of intimidating and derogatory behaviour occurs nowadays. A lot of it is online based and social.

Aimee: So, instead of … prior to the first of July, having to satisfy that that behaviour was intimidatory or offensive, it now automatically falls part of that family violence, because of the prevalence of that sort of behaviour.

Aimee: So, that’s a good protection I suppose for anyone wanting to apply for a family violence order after the first of July, because it does make it a little bit easier in terms of satisfying these elements when they’re specifically listed as opposed to being very broad brushed.

Khew: Yup. So, I think to simply put it, it has been fine tuned by the parliamentarians.

So, if you had a neighbour, for example or you’re going against just a random stranger that has been continuously harassing you, continuously is the term. Okay? And if they continue to do so, you can choose to either do it under section 11A Violence Restraining order, or 34 misconduct Restraining order. Thirty-four is easier based on wording because it is intimidating and offensive. The drawback of misconduct restraining order from my experience in the many cases we’ve dealt with, is the police don’t quite enforce them, unfortunately. Especially in circumstances where they are neighbour disputes. They tend to respond better to violence restraining order because violence restraining order has a term violence, so 11A denotes the very definition itself of what violence is. It gets a new definition as well.

Right, moving aside from I guess the new act and how it’s a bit different.

Khew: Is that it’s not binding.

Aimee: It’s not binding. So, it’s basically a promise that I won’t do this to you Khew and you won’t do that to me, or something along those lines.

Khew: Is that a threat?

Aimee: Well, maybe. But I suppose, if that person was to break that promise and to continue contacting you or to continue behaving in the same way, is actually, it’s not enforceable. The police will actually not do anything. There’s no legal repercussions for an undertaking; so, that was always a risk with the undertaking.

Khew: Well, there are legal repercussions if you breach an undertaking. It’s another, reason to reapply again, but …

Aimee: It’s not automatically yet?

Khew: It’s not a here nor there. You’re in the middle of the desert still.

Aimee: Yeah, and you’re still sort of in the same boat that you would have been when you first initially applied.

Aimee: So, the person who is being bound by the violence restraining order can agree to conduct agreement without having to admit to the allegations that are being brought forward and without having them be tested before the court as well.

Khew: On the dispute of facts.

Aimee: On the dispute of facts. So, that’s obviously a quicker way of resolving a matter with it obviously having to go to a final trial hearing. This is somewhat … you know it won’t work in every situation obviously, but where it can, it is useful. And the good thing about it as opposed to the undertaking is that it is enforceable, which is what we … It protects the clients.

Khew: Essentially, yeah. I mean, you’ve been to court this morning with the very same thing.

Aimee: Yeah, just this morning I was at the Midland Magistrate’s court and was negotiating a conduct agreement between two parties and the Magistrate actually said, “Oh, you might have to give me a little bit of assistance here because I’ve actually never done one before.” So, it’s that new.

Aimee: It’s very new. So, even one of the Magistrates was not entirely sure who to affect the conduct agreement, but as time goes on.

Khew: We’ve been through the process. So, it’s pretty much if you agree to conduct agreement … Sorry, if the respondent agrees to the conduct agreement, the court will enforce the agreement like an order. So, to simply put it when negotiating, we can put on the table obviously an undertaking, but we know how well it goes. It does resolve a lot of disputes, most of the time if the parties are amicable. But, if it’s serious, conduct agreement is something that everyone should consider. That’s in the circumstances of the family violence restraining order.

Khew: Not that I’m aware at least, because of the way the law is constructed. So, in violence restraining order they are separate mechanism but of similar means. I think it’s under section 33, and it does say that what happens is if the respondent does not object to any interim orders being in place to be made final, it’s also done on there without admission as to a liability basis.

Khew: The court actually does recognise that and it’s not at all prejudicial. What is prejudicial is if undertaking’s not resolved the situation, if conduct agreement’s not agreed upon, and if the interim order is not consented upon, you go to trial and you lose, there is a fine in effect. And that is a serious issue because the court will record by way of reasoning why they believe the applicant should win and what evidence they’ve considered in doing so.

Very recently we’ve done quite a lot of restraining order trials, and obviously when they go to trial and there’s a final effect, I’ve always … most of the time in the circumstances that I’ve represented my client, the final effect usually is very damning to the other party. So, long story short if the parties do settle, it’s probably the best thing. Every lawyer should, in my opinion at least … I can’t speak on behalf of the rest of my peers or colleagues but if they opportunity presents itself and everyone agrees, then a conduct agreement is something very …

Aimee: Definitely to be considered. Because I suppose instead of, you know with court backlog at the moment, realistically if this morning’s hearing that I attended on behalf of Khew was to not go by way of conduct agreement and was to proceed to a final trial hearing, we’re looking at probably April, May, June. So, that’s about seven months away.

Khew: Same as in general. The next hearing is in …

Aimee: Each court is different but generally you’re looking at at least a six month wait. So, in the interest of resolving the matter quickly and letting everyone move on with their lives, it is a good option. But obviously it won’t work in every situation. But where it is a possibility it seems like a good avenue definitely.

Khew: Yeah, but look, that doesn’t mean our practise actively campaigns in settling everything. In some circumstances and actually most circumstances in our cases that we’ve dealt with, the only resolution is by way of a trial. And that had happened on a few occasions in my recent clients as well. So, I’m not saying … well, to resolve is obviously the best option, but sometimes you just can’t.

Khew: Look, costs about this is a separate issue so if the applicant wins in a trial or the respondent wins the issue of cost is a completely separate issue. We’ll be talking about that sometime in the distant future.

Khew: Yes. Alrighty. Anything else to say?

Khew: Alright, thank you. Thanks Aimee.

Aimee: Thanks very much. Bye.